Close
Nativa Home
Nativa About Us
Awesome Gallery
Check out all the phases This is Nativa
Download Project Documents Documents
Interested? Contact Us
Looking for more information? Blog 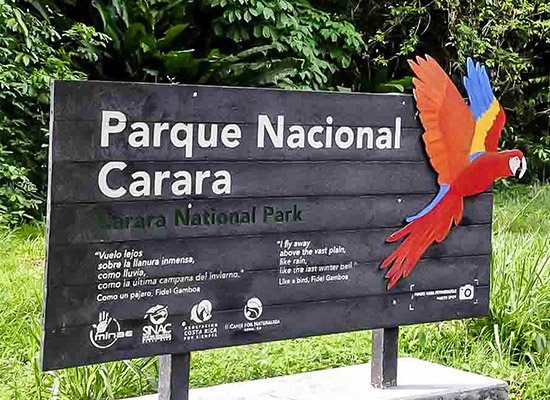 One of the most important National Parks in Costa Rica

The Carara National Park is situated in the Garabito canton, just 14 miles north of Jaco and nearly 4 miles south of the Tarcoles River. Its location just off Route 34 makes it a great one-day trip alternative for families and tourists to enjoy the flora and fauna of the country. The word Carara derives from the indigenous Huetar word for “River of Crocodiles” which more or less sets the tone of this natural haven.

But aside from being the favorite gathering spot of the crocodile population in the Central Pacific, this national park has amassed the admiration of the avifauna spotting world. It is the home of 47% of all the bird species in the country.

The Carara National Park is an interesting biological crossroad. Located in the northernmost region of the rainforest, It is the only transition woodland of the Central Pacific. This has made it the favorite habitat for many species of birds, including residents, migratory birds, and as well as terrestrial birds and seabirds.

The location of Carara places it in the middle of the humidity of the southern zone and the dryness of the northwest. Temperatures are expected to range from the 70°F to 90°F. If you want to avoid the rain, visit between the months of June to August or December to April.

One of the biggest attractions of the national park is its population of the Scarlet Macaw, the second largest species of parrot in Costa Rica. The park is also the home of other 420 species of birds, which is close to half of the 900 reported in the country, including Bare-throated Tiger heron, Black-hooded Antshrike, Clay-colored Robin, Gartered and Black-throated Trogon, Golden-crowned Spadebill, Great Tinamou, Marbled Wood-quails, Northern Waterthrush, Orange-collared Manakin, Pale-billed Woodpecker, Prothonotary Warbler, Ruddy-tailed Flycatcher, Slaty-tailed Trogon, Squirrel Cuckoo, Streaked Flycatcher, Tawny-winged Woodcreeper, Turquoise-browed Motmot, White-tipped Dove, Yellow Warbler,  and many more!

In addition to being one of the finest options for birdwatching, it is also home to 480 plant species, 124 reptile species, 112 mammal species, and 62 amphibians species. Walking through the trails you will be able to spot sloths, monkeys, white-tailed deers, and brockets to mention a few.

The park welcomes all types of visitors. The Carara National Park was the first conservation area in the country to offer a wheelchair-accessible trail. This trail also has signs written in English, Spanish, and Braille, as well as maps with systems for visually impaired people. It is less than 1 mile long and there is wi-fi access as well as bathrooms adapted for people with disabilities.

Aside from the universal footpath, there are four other trails that combined offer more than 3 miles of trails that meander through creeks, lagoons, and hundreds of species of exotic plants and trees.

Numerous pre-Columbian Indigenous settlements can be found throughout the more than 5 hectares of protected land and forest resources. Some studies have been conducted and some of the archeological findings date back to 1500 a.c. This makes Carara not only an important biological habitat but also a historical site.

Enter your email address and we will send you a link to change your password.